I was asked last week to write an essay about Australian climate fiction for the Danish weekly Weekendavisen, it’s here if you happen to read Danish: Katastrofen og Litteraturen

If you don’t, never fear! The English-language version of the essay is now up at LitHub. It contains a good but non-comprehensive reading list on the subject, so it’s been great to see that being shared and discussed.

I also chatted briefly with RN’s The Book Show about the fires – the audio is not great but the segment is online here, and includes some lovely shoutouts to fireys and the Authors for Fireys auctions.

As part of that fundraising drive, I auctioned off some of my prints to raise money for the CFS Foundation, and was really thrilled to be able to contribute… in the end the auction has raised over half a million dollars which is just incredible! Huge thanks to the organisers and all the writers and artists involved.

As if news of destruction to habitat and homes, the awful death toll (33 as I write, six of those firefighters) and losses were not enough, we are also dealing constantly with denialist reactions to this crisis, the pathetic responses of a corrupt and reckless government, and a lot of irresponsible reporting in the Murdoch press and online, designed to spread disinformation. It is hard to avoid despair at times. It is hard to maintain the ‘optimism of the will’ that turns fury and grief into action. However, the evidence of cultural change at work is everywhere too. One of the things I keep coming back to is the way that so many people are stepping up and helping each other now, volunteering endless hours and resources to offer assistance to strangers. Active civil society, pushes for public accountability, and cultures of reciprocity emerging in the crisis are all deeply encouraging. I know that we can turn this work into a re-engaged and renewed democracy. Activists, artists and writers all over the world are giving so much energy towards making our time count, making us better able to face what we need to face and change what we need to change. I feel less isolated in this struggle, less despondent, every day.

Filed in writing | | Comments Off on More climate fictions

I was invited to write an opinion piece for the Washington Post about the Australian bushfire crisis, which you can read here:

In fire-ravaged Australia, climate denial goes up in smoke

And here is an easily accessible Climate Council report on the link between bushfires and greenhouse gas emissions, in case you or any folks you know aren’t up to speed on the science.

I am also joining in the #authorsforfireys twitter auction and selling a full set of my Emergency Services prints to raise funds for relief efforts. You can bid in the replies, and the winner will donate the amount to either the CFS Foundation or South Australia’s Emergency Relief fund (your choice!). The auction will end at 10pm on 11 January (AEST). I’ll post to anywhere in the world. 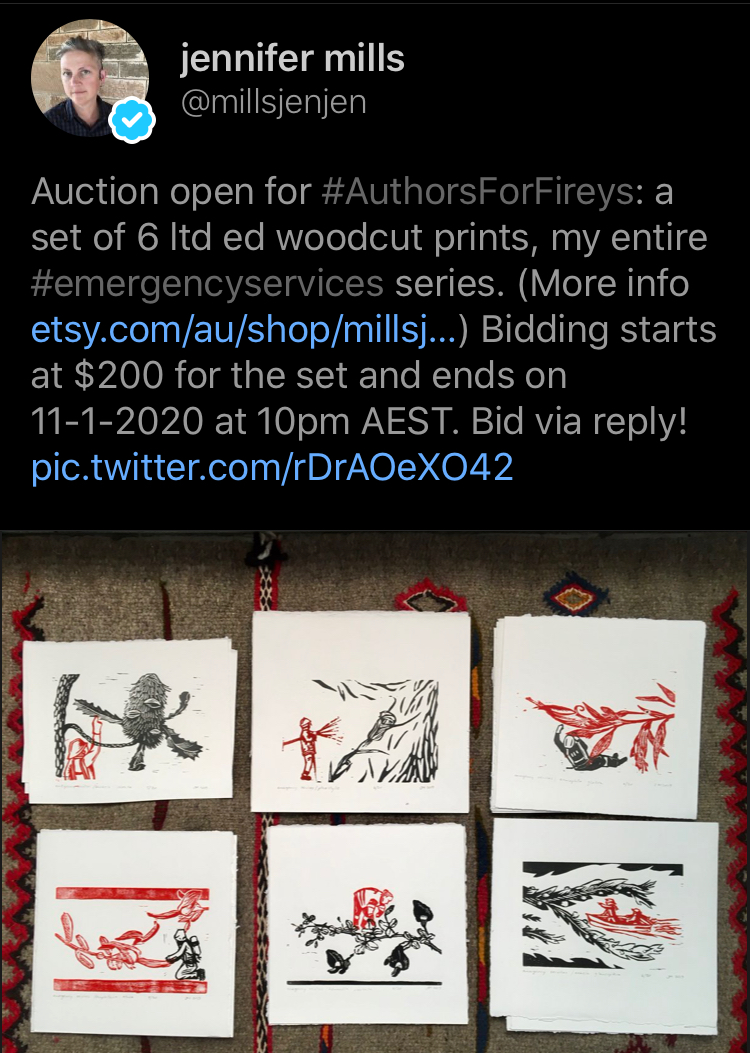 There’s more info about this printmaking project on etsy.

It can be hard to focus on art in the midst of crisis, while feeling so much anger at wasted time and at denialist spin, as well as horror at the scale and impact of these fires. I am frustrated not to be there on a strike team, and feeling for all the volunteer firefighters battling exhaustion and flames to save lives. As well as the terrible loss of life and damage to ecosystems, the trauma and health effects of these fires will be felt for a long time.

It helps to have something useful to do – to write, to help where I can, and to organise. It’s amazing to see so many people offering assistance through initiatives like findabed.info. The generosity and solidarity of ordinary Australians shines through the smoke. The climate emergency has well and truly arrived; it is up to all of us to turn the energy of this moment into the change we need.

Filed in writing | | Comments Off on A quick fire-related update

Dyschronia has been shortlisted for another award, this time the Fiction category of the Adelaide Festival Awards for Literature! 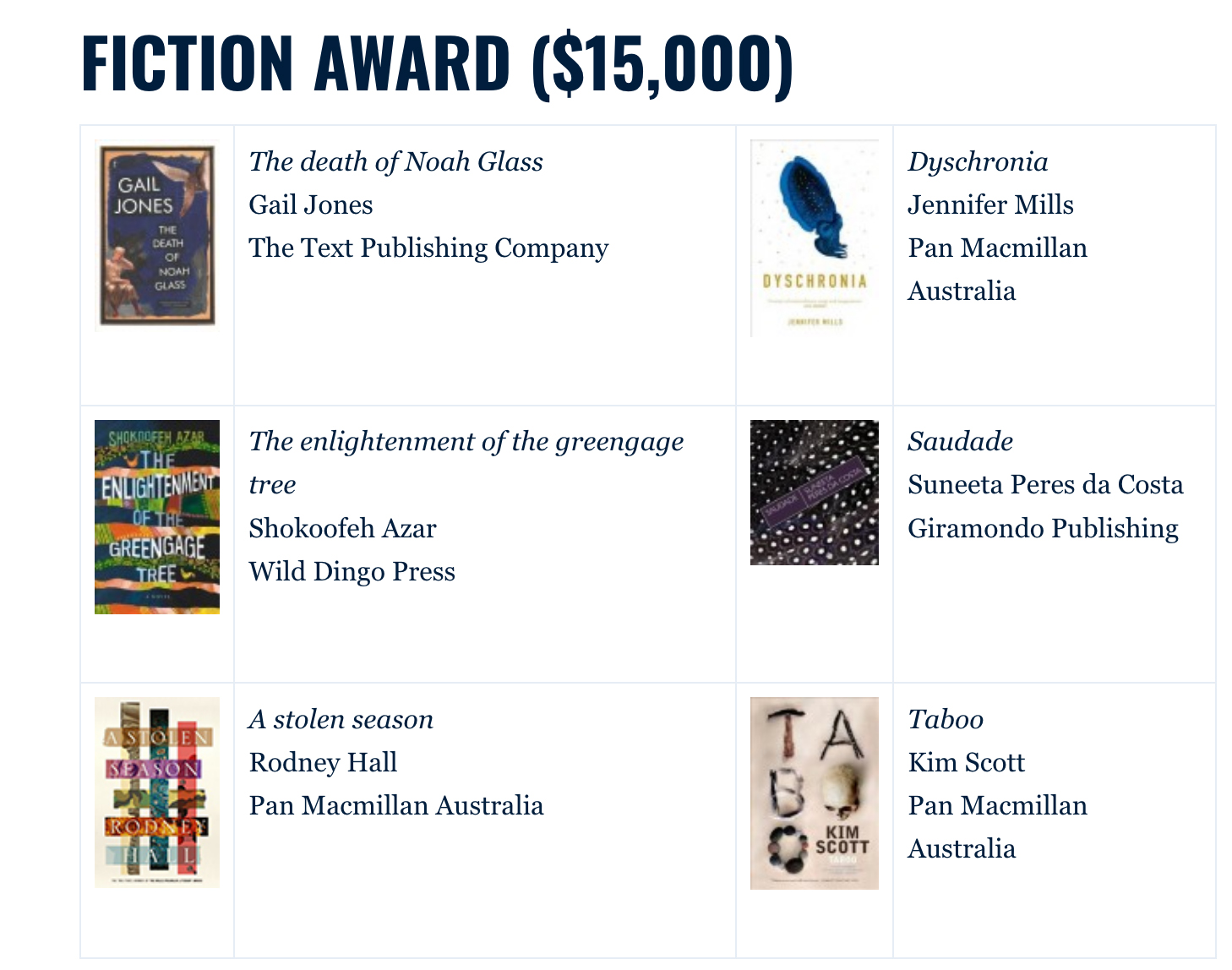 I am thrilled of course, and want to thank the judges and congratulate everyone who made the shortlists. I also long for a day when the book becomes less relevant, a historical document about a time when we used to fail to understand the implications of our actions…

Instead, Australia is on fire.

I generally keep my writer self and my volunteer firefighting self pretty separate. Watching the terror and intensity of Australia’s current bushfire season unfold, in particular watching the way that volunteers are being abandoned by a government that refuses to help with resources let alone discuss the climate emergency, silence is not an option I can wear. So when the Adelaide Review asked me to write something for them on the subject I couldn’t say no. Here it is, written a couple of weeks ago before the PM went to Hawaii in the middle of a national emergency and several people including two young firefighters died. My heart goes out to their families and to all the brigades out there risking life and limb.

Here in Italy we have had major flooding – the Po burst its banks and a weekend trip to Venice last month turned into an adventure in a labyrinth of the Anthropocene, which I’ve been writing about in a long essay that I hope will appear early next year. Standing in floodwaters checking on family in NSW felt both strange and galvanising. I’ve been to several climate strikes here and the courage of young people to take up this fight gives me courage too. 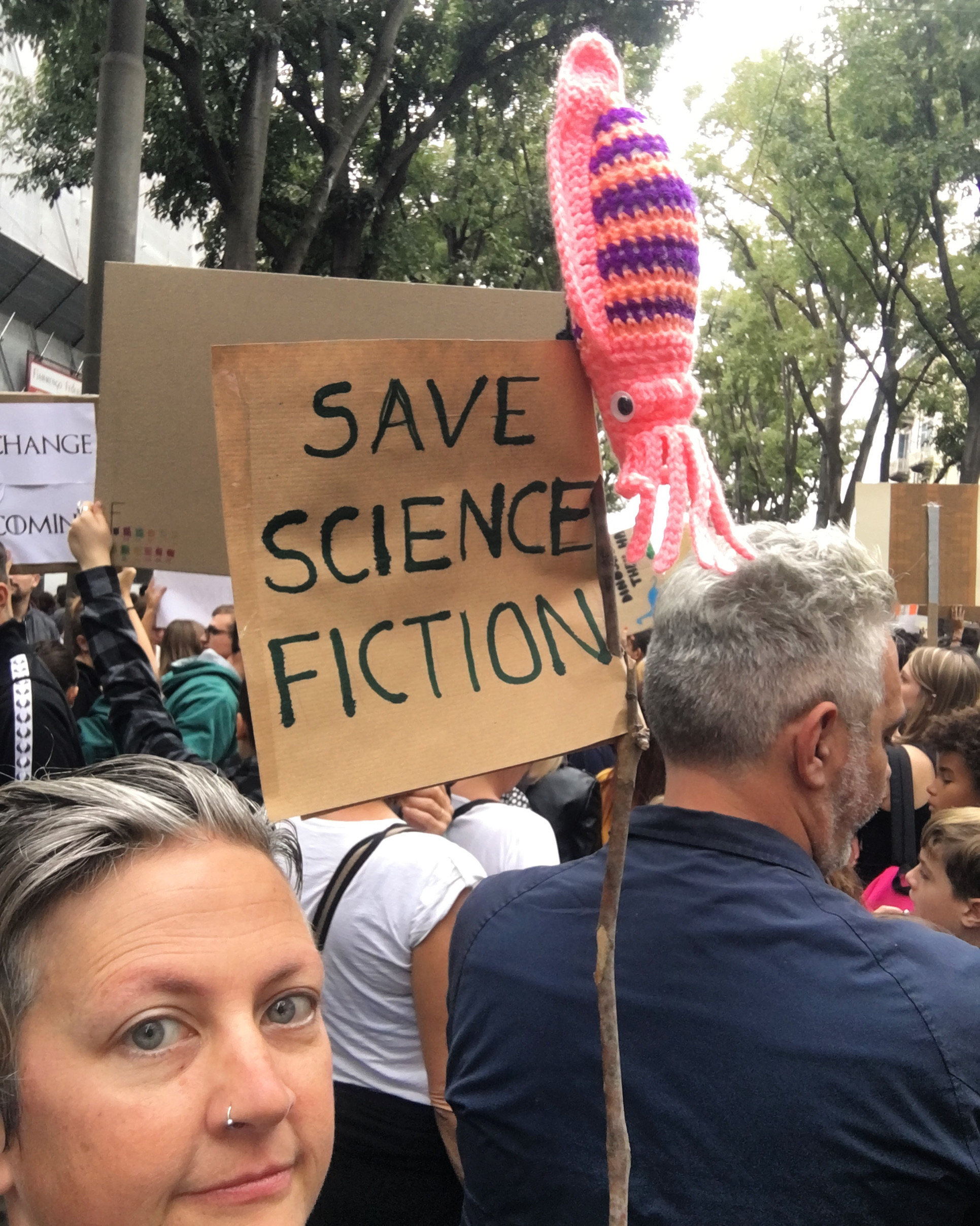 I wish you all a safe break, and may you get a bit of rest between smoke, fire and heatwaves, if you’re in Australia. May some much needed change come out of all this, and soon.

Sharing a post from seven months ago again, because it sums up many of my feelings about 2019: The other side of climate grief is climate fury

Filed in writing | | Comments Off on On fire

Exciting news! I’ve signed a contract with Picador for another novel, the queer ghost story I’ve been working on since 2015. It will be out in Australia sometime in 2021. I started the book in Beijing, wrote a good chunk of the first draft longhand at Yaddo in upstate NY, lost the notebook along with my luggage on the way back to China from Montreal (it turned up a few days later), brought a well-backed-up electronic draft home to South Australia with me and worked on it in a few different places, mostly Ngadjuri country (the mid north) but also bits of SA, NSW and Tasmania, then back to Beijing. And now I’m in Torino, sitting in autumn sun on the terrace of our apartment here, looking forward with more excitement than trepidation to the editing process. 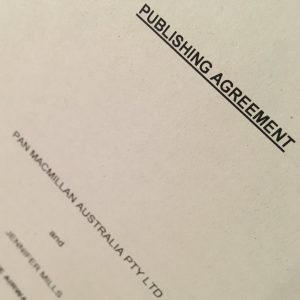 Okay, so I move around a bit with every book, but this is a particularly well-traveled manuscript, a fact that suits the material (and immaterial) within: ghosts, borders, transitions, invasions, infections… I won’t give too much away until we’re closer to publication, but I’m really interested and more than a little spooked to find out what people make of it.

The first 11 weeks here have been full of learning and adventure. The challenges of changing countries are no less daunting for having been faced before: new systems, new bureaucracies (Italian notoriety in this regard is well deserved), a new language and culture, finding housing, figuring out how things work. After three different short-term rentals, we finally found a beautiful place, a top floor flat in the neighbourhood of San Salvario, which is very diverse, has a great local food market, and is close to a big park. The shipping arrived last week, and happy reunions with bicycles and a few precious artworks have made the house feel more like home. I’ve embarked on a language course at the Intercultural Centre, and my classmates are certainly an intercultural bunch, hailing from Morocco, Iran, Peru, Mexico, Palestine, France, and elsewhere (I taught everyone about quokkas last week so I feel I am holding up my end of the intercultural exchange bargain as the lone Australian present). Learning Italian is great fun, and most people we encounter here are very patient with our efforts, which makes it pleasant to practice. I’m also finding the saturation of excellent bookshops in this city extremely motivating.

Torino is a city that celebrates its writers. I walk by a little square named after Primo Levi every day, and cycle past the library named after him on my way to school; Calvino, whose Invisible Cities I am attempting to read in Italian, lends his name to a park and another library. My own local is Biblioteca Natalia Ginzburg, which has sent me after her work. There’s a street named after Antonio Gramsci – a very boutique address, one wryly notes – and nearby, a plaque to commemorate Nietzsche’s residence here. I’ve been heading out to a few literary events, including visits from Valeria Luiselli, Samanta Schweblin, and Omid Tofighian (Behrouz Boochani’s extraordinary No Friend But The Mountains has just been published in an Italian translation).

At the same time, it has been good to withdraw a little from the business of ‘being a writer’ and focus on the work itself. I’m starting a new project at the moment, and it’s both blissful and terrifying to be at first draft stage again – each time I approach, I’m a little older and wiser, but no less intimidated. It still feels like stepping into the air and hoping something solid will materialise underfoot. There are euphoric days and despondent ones, and I am working very slowly and gently, thinking about sustainability and care. Being here is allowing me to be receptive, present to learning and curiosity, in a way that balances the productive side of things. Winter will be along soon enough, and with it the impulse to bunker down at the desk… but for now, I am tracking the sun.

Filed in writing | | Comments Off on Tracks, contracts